In the News Today®

Koen Jacobs, ITNT.news editor’s note: This NaturalNews.com article was removed from the website by Mike Adams for reasons he explains like this:

“Earlier this morning, Natural News published an article calling for Nuremberg-style trials for researchers who use human children for medical experiments.

The article called for court hearings, prosecutions and punishments against those carrying out these crimes against humanity, in much the same way that Nazi war criminals were prosecuted.

The article was misconstrued as calling for violence against vaccine researchers, even though it specifically emphasized court-ordered prosecutions and punishments and additionally called for due process so that “society” could decide the punishments for those engaging in medical violence against children.

As a result, Natural News and myself are being viciously attacked for daring to call for prosecutions against those who use human children in medical experiments.

We specifically do NOT call for violence against anyone, as our goal is to end medical violence against children. To end this medical violence, we believe that courts must prosecute those responsible for carrying out medical experiments on children. We do not believe in vigilante justice, and I have emphasized repeatedly that violence is the wrong approach to solving these problems. I have also repeatedly emphasized that I call for myself and others to honor the court decisions on such prosecutions.

Nevertheless, we apologize for not stating our positions more clearly, and we have removed the article in question. We plan to restate this in a more meaningful way that will not be misinterpreted.

The FDA documents presented in the article are, of course, extremely alarming, as they show 86% of children aged 12 to 15 years old suffering adverse reactions from Pfizer covid vaccines. The fact that so many children are being harmed does not seem to bother anyone involved in vaccine research, as they continue to push the use of children as human guinea pigs for dangerous medical experiments.

Those who speak out against this practice are targeted and threatened, as we are being threatened now. There is a war being waged on humanity, and those who are working to protect innocent lives and stop the injection of spike protein bioweapons are being targeted and criminalized.

As the publisher of Natural News, I want to protect innocent life, halt vaccine violence against children, and restore health freedom in America. This is why I am being targeted, and this is why Natural News is being silenced.

Those responsible for crimes against humanity should absolutely be arrested and prosecuted by the courts, as I have consistently called for. Nevertheless, I believe I can do a better job of explaining this concept so I will work to choose my words more carefully in order to contribute to a better understanding of what’s at stake here and the importance of due process for all those involved in these crimes.

I hereby apologize for any misinterpretation of the article in question, and I hope to find ways to use words that contribute to the rational process of society uncovering the truth about these vaccine experiments as well as the proper, court-ordered punishments for those who are found guilty of such crimes against the innocent.”

I say these are BS excuses, for 3 reasons.

It’s sad to see that also Adams doesn’t have the courage to stand up to the real enemies of the free world. If you don’t even have the courage to keep this kind of articles online then it is clear to me that such websites have little or no value for the real resistance in this 3rd world war. On the contrary, they are obstacles that need to be dealt with accordingly.

Put the article back online Mike! Prove to all of us in the real resistance that you don’t kneel before any communitarian tyrants.

MIKE ADAMS, NATURAL NEWS (May 27, 2021) – The horrifying crimes against humanity once pursued by the Third Reich are now being repeated in America, but this time under the label of “covid vaccines.”

Healthy human children are being injected with deadly biological weapons — spike proteins that even the Jonas Salk Institute conclusively identifies as the culprit behind vascular disease and blood clots. These children are being recruited into mRNA medical experiments that transform their own bodies into bioweapons factories, churning out spike protein particles that may kill them, all while researchers watch and document the horrifying consequences.

This is all openly admitted by the FDA, which endorses the use of human children for potentially deadly covid vaccine medical experiments. The FDA has published horrifying reports of adverse reactions experienced by children in a Pfizer covid vaccine “fact sheet” labeled 144413. See the original FDA document here (PDF).

In case the FDA removes this sheet, we have archived it at Natural News servers here (PDF).

Hear my full Situation Update podcast (at the end of this article) for the complete discussion of what all this means.

FDA admits mRNA vaccines cause adverse reactions in 86% of children, but calls it “safe” anyway

This Pfizer page at the FDA provides links to all the fact sheets and press releases where the FDA celebrates expanding its emergency use authorization to children aged 12 to 15.

That fact sheet contains the following table that details the shocking rate of side effects and damage experienced by 12 – 15 year olds (i.e. children) who were given the mRNA injections:

Table 5: Study 2 – Frequency and Percentages of Adolescents With Solicited Local Reactions, by Maximum Severity, Within 7 Days After Each Dose – Adolescents 12 Through 15 Years of Age 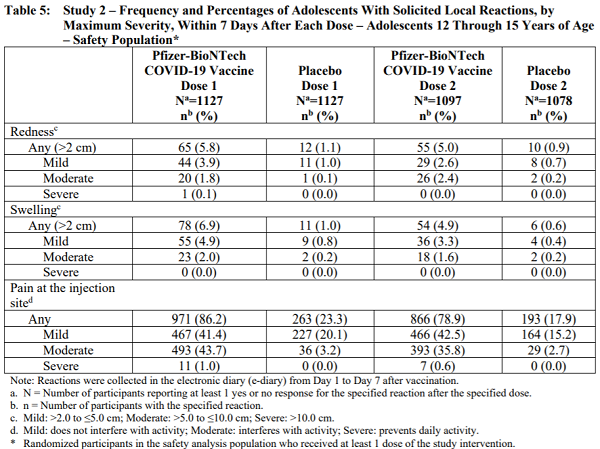 Among those children injected with the mRNA vaccine medical experiment:

Amazingly, the FDA claims in its celebratory press release that expanding Pfizer’s experimental vaccine to 12 to 15-year-olds is a kind of breakthrough, not a crime against children:

“The FDA’s expansion of the emergency use authorization for the Pfizer-BioNTech COVID-19 Vaccine to include adolescents 12 through 15 years of age is a significant step in the fight against the COVID-19 pandemic,” said Acting FDA Commissioner Janet Woodcock, M.D. “Today’s action allows for a younger population to be protected from COVID-19, bringing us closer to returning to a sense of normalcy and to ending the pandemic. Parents and guardians can rest assured that the agency undertook a rigorous and thorough review of all available data, as we have with all of our COVID-19 vaccine emergency use authorizations.”

In other words, the FDA is admitting they are fully aware of the 86% side effect rate when it comes to injecting children with experimental mRNA “vaccines.”

They know this harms kids. That’s the whole point.

That makes the FDA complicit in carrying out heinous crimes against humanity by subjecting children to these mad science medical experiments that smack of Josef Mengele and the Nazi Holocaust.

The state of Kano is seeking $2.6 billion from Pfizer, charging that the company illegally tested an experimental antibiotic, Trovan, on children in Kano during a meningitis outbreak in 1996. According to the government, the drug trials were carried out without the informed consent of the children’s parents or the Nigerian government, and led to the deaths of 11 children. Dozens of other children were allegedly harmed by the drug.

Whether in Nigeria or America, Pfizer is harming children in the name of Big Pharma profits

When it comes to mRNA vaccine trials in the USA, when serious reactions such as facial paralysis are identified in the vaccinated group, the FDA (and presumably, the researchers) dismiss it as coincidence. From the FDA’s own document:

Bell’s palsy (facial paralysis) was reported by four participants in the Pfizer-BioNTech COVID-19 Vaccine group. Onset of facial paralysis was Day 37 after Dose 1 (participant did not receive Dose 2) and Days 3, 9, and 48 after Dose 2. No cases of Bell’s palsy were reported in the placebo group. Currently available information is insufficient to determine a causal relationship with the vaccine.

Thus, no matter what horrific side effects are caused by the vaccine experiment, they are dismissed and ignored. After all, there are billions of dollars to be earned from authorizing more medical experiments on children, and they can’t let side effects get in the way of their agenda.

This FDA document even admits the vaccine is not approved and may cause serious injury or even death:

FDA has authorized the emergency use of the Pfizer-BioNTech COVID-19 Vaccine, which is not an FDA-approved vaccine.

Severe allergic reactions, including anaphylaxis, and other hypersensitivity reactions (e.g., rash, pruritus, urticaria, angioedema), diarrhea, vomiting, and pain in extremity (arm) have been reported following administration of the Pfizer-BioNTech COVID-19 Vaccine outside of clinical trials. Additional adverse reactions, some of which may be serious, may become apparent with more widespread use of the Pfizer-BioNTech COVID-19 Vaccine.

The FDA even admits that life-threatening anaphylactic shock may occur following the vaccine, or that vaccine recipients may lose consciousness:

Syncope (fainting) may occur in association with administration of injectable vaccines, in particular in adolescents. Procedures should be in place to avoid injury from fainting.

Is the mainstream media ignoring your reporting and news tips?

Are you a blogger, citizen journalist or activist who has an urgent message for the public?

Get the different perspectives about issues that shape society.

Have YOUR voice heard!

Only at In The News Today (ITNT).

Do you have your own channel? Are you a blogger, a citizen journalist, an artist, a developer or a creator?

Create an additional income stream as an affiliate of the Winning Ads advertising platform.